WOOF! Hey, gate's open! Time for a roam old man, said the frisky black and white Shetland to the other -- an old "one-quarter" Alsatian -- totally black, half blind. They padded through the half-open gate which had just admitted an unwitting father-in-law. In a matter of seconds, they were out into the cool night air of Christmas. And were gone, as noiseless as a gentle breeze. (The Shetland is a regular visitor. The one-quarter Alsatian is a resident.)

So, after salad, after a heated squabble between the sister and brother, there was a little voice from the maid that went, "Sir, dogs missing."  The father-in-law (of the sister) had just finished saying grace, thanking God for the food, and the family reunion (but stopped short at praying for peace on earth and goodwill to all man as that would be alluding too much to the squabble which had just taken place).

Dad (of the squabbling sister and brother) was the first one to stand up and ran out. I was surprised at his speed and alacrity. The sister and her husband followed. The brother, who was still sulking, stayed behind with the mother and the father-in-law. I will keep the gates and door open for the dogs to come home, said the mother. They will come home, she assured us, as we also disappeared into the night.

Where could two dogs go? Lots of places. There was a dog run nearby, and another park frequented by joggers, brisk walkers and their dogs. But to get to these two places, they would have to cross roads, which they have not proven to be good at. Driving in two separate cars, we cruised around the area. No one seemed to have seen two dogs happily trotting with their tongues lolling out (which was my mental picture of them as I drove along, eyes peeled for black moving shadows.) The black one has been known for its escapades. But as he doesn't see very well these days, doesn't usually go very far -- usually to the junction where the lane meets the main road -- where he would just stand and sniff the air and then go home.

Dad said the young one must have goaded the elderly one on. Muttering "triple sian" (a Hokkien word he likes to use to describe a dire situation), we drove back to the canal where we had seen a group of workers gathered at the edge. It's the Shetland, he said, and hopped out of the car even before I could stop completely. Once again, I marvelled at his alacrity. I got down the car too, thinking the Shetland had fallen into the canal and the group of workers were trying to fish him out.

My brother returned, shaking his head. He had seen something white bobbing in the canal and thought it was the dog. The workers were doing some work at the canal, that's all.

We parked and started combing the park. I stopped to ask a jogger whether she had seen two dogs. Her eyes lighted up in hope for me -- she had seen two black dogs, just, she said. But we had also seen those two black knights -- one of them looked like our one-quarter Alsatian. But they were not our dogs. (The two black knights are actually quite well known in the area -- they are always together and trotting like they mean business -- the park patrol.) If the Shetland and the one-quarter Alsatian had met these two, they would be dead meat.

After speaking to the jogger, I lost sight of Dad. No use calling him as he has left his handphone at home. (Nobody brought their handphones along actually. Only me.)

A vast expanse of darkness in front -- and nobody in sight. The park had become deserted. Where could Dad have gone? We had a few missing dog episodes before. Each time he had rushed out to look, running too hard and getting himself all breathless and pale. Did he faint somewhere in the park?

Then I received another call from Mum, the harbinger of good news.. All have come home for Christmas, she said. Peace on earth, goodwill to all man... and dogs.

The Shetland had cleverly led the one-quarter Alsatian back to his own home (the sister and her husband's place) -- a little distance away actually -- quite a long walk for dogs. They had found him running around at their block, while the other dog was busy marking territory. They were asking the guard whether he had seen any dogs, but the guard said he hadn't. Just then, the sister caught a glimpse of something furry behind a pillar.

We had drove by twice, but each time we said no point going into the condo as the dogs couldn't be so clever. Well, never under estimate a Shetland. 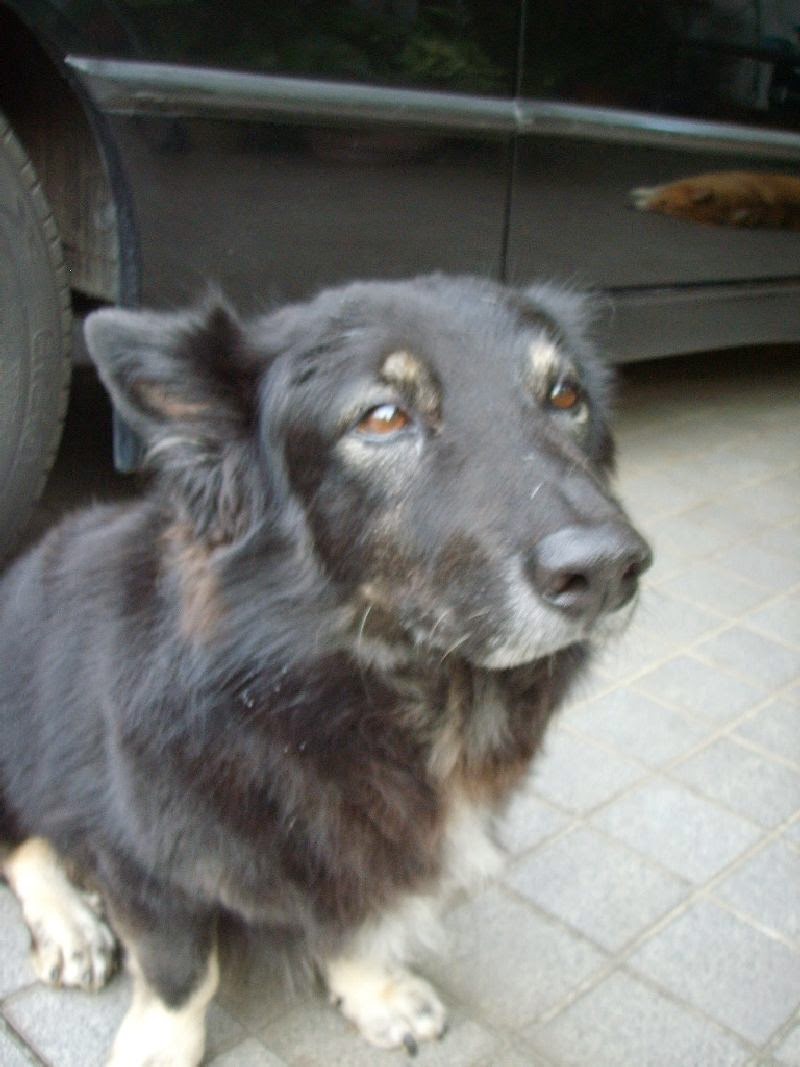 Postnote:
The "one-quarter alsatian" moved on at the ripe old age of 16 on 5 Sept 2014. He will always be remembered by me as joyfully sniffing the air at the road junction.
Posted by Lo Tien Yin at 02:53:00