WAS sitting in a double-decker yesterday, on my way to Orchard Road to soak in the Christmas decorations. For some reason, I recalled what a Pre-U friend recounted. She has encountered a  very conscentious bus conductor who shouted "Br-i-a-a-a-k" (brake!) at every stop, then "goats-head" (go ahead) when all the passengers have alighted.

The driver wasn't so great, she continued, because each time the conductor shouted "br-i-a-a-a-k", he would do an emergency brake and send everyone plunging forward.. My friend finally figured out why this conductor was going on so (after going with the flow up and down the bus aisle a few times) -- the stop bell wasn't working so each time a passenger indicated that he was going to alight, he would do his "br-i-a--a-AK!" thing. The sustained "br-r-r-r" prelude was supposed to give the driver some warning but perhaps not enough. Hence another jerky stop.

Just an aside: Talking about emergency brake, my driving instructor used to tell me that it would only be a good "brake" if all those iron poles he stored behind in the boot (for practising parallel parking), rolled about and "clanged" against each other loudly. Otherwise, I wouldn't have executed a good emergency brake. Of course, I am talking about an era which was quite long ago, I seem to hear that no poles are needed these days for practising parking.

And of course too, stop bells (or rather buttons, as they don't go ding-dong any more) work very well these days. There being no bus conductors today, I can't imagine passengers having to shout "br-i-a-A-AK" for themselves when they want to alight.
Posted by Lo Tien Yin at 18:48:00 3 comments:

MY DAD had a rather adventurous spirit. One day, as we were walking past Clifford Pier (it might be a Sunday afternoon, I couldn't really remember), he suddenly had a brainwave and wanted to take a sampan all the way to Kallang Park.

We were stepping onto the boat when mum noticed that there were ominous black clouds in the horizon, where presumably, the sampan man would be rowing towards. Dad poohed-poohed away her concerns and we hopped on board.  Sure enough, just as we were in the middle of the sea, little raindrops began to fall. The waves were rocking the little sampan quite a bit.

So since this boat ride, each time Dad suggested another sampan ride, Mum would give a very firm NO.

HOW can I miss blogging about these famous gables of the old Thong Chai Buiilding of Chinatown? Instead of straight slopes, these gables have wavy slopes. (Besides spiral staircases, one of my other fond subjects is gables.)

The Thong Chai gables belong to three main halls, built in the Southern Chinese architecture style. Constructed in 1892, the curvy gables were not characteristic of the style (so I read from the write-up in Wikipedia). But I like to think that they depict the serpentine body of the dragon (like the dragon kiln?). Just my guess and not based on any in-depth study of architecture and culture :)

The building's former address was 3, Wayang Street which had disappeared from present day Singapore Street Directory.
Posted by Lo Tien Yin at 22:22:00 No comments:

Meet you at the "calculator building"

IT is an impressive landmark by any name. The OCBC building at Chulia Street was nicknamed "calculator building" when it was the highest building during the era (the 52-storey skyscraper was completed in 1976).

The nickname is certainly apt. It is indeed shaped (with buttons to boot) like one of those calculators which were so handy in those days -- when handphones were not around (and even when they came into the scene, the early day handphones, though the size of an elephant tusk, did not have such features).

And OCBC being a bank, there must have been a lot of calculating going on. So my friends and I agreed wholeheartedly that the nickname suits the building to a T. I haven't gone into the building too many times though -- only once when I met a friend there who was working as a public relations officer at the bank.. 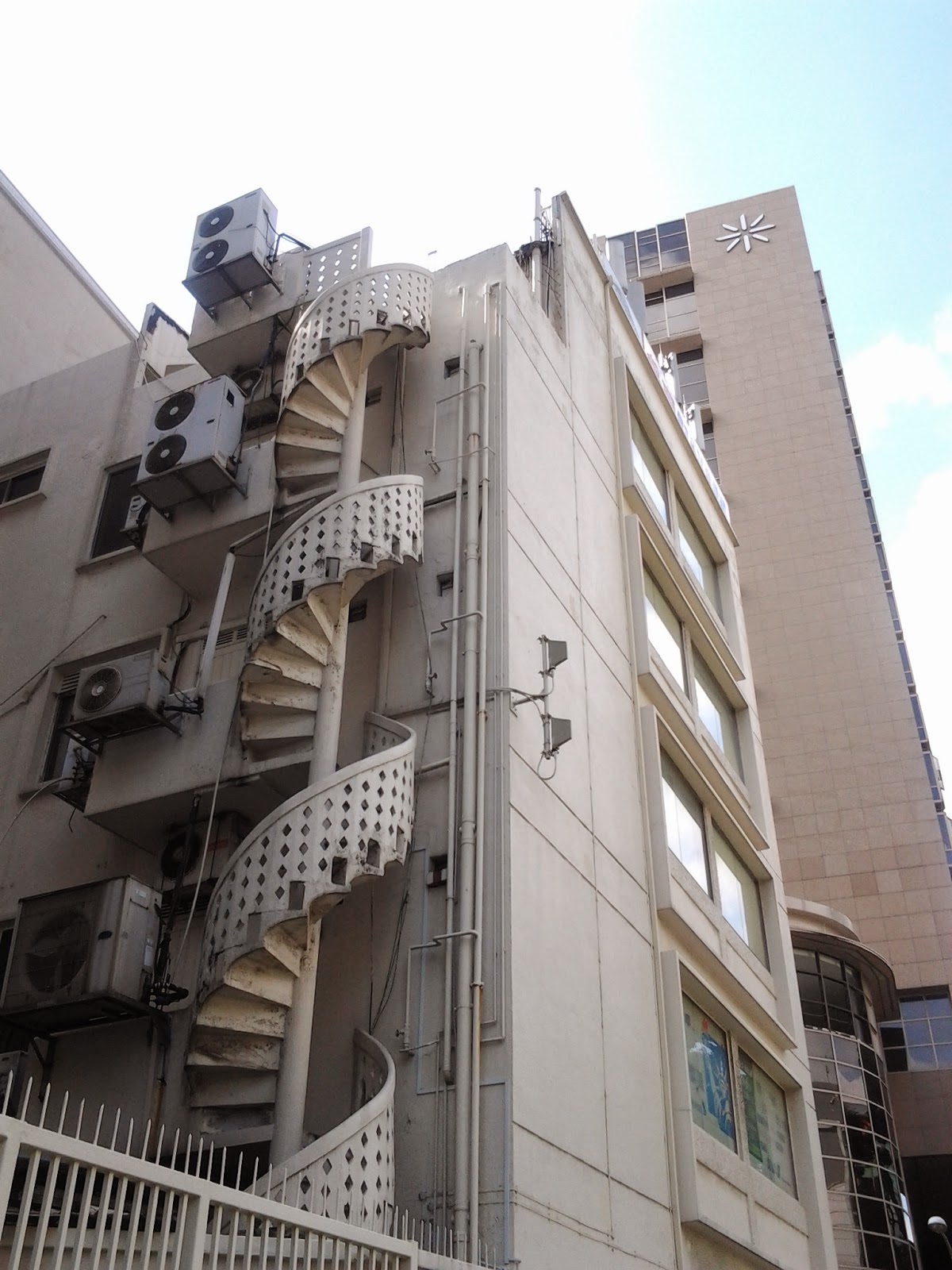 THIS spiral staircase has always held a lot of charm for me. It has always captured my attention each time I passed by it in the bus to town. It is part of the Siakson Building on 3 Miller Street.I wish I know how Miller Street got its name. The earliest Eurasian enclave was around the area -- Waterloo Street, Bras Basah Road and Middle Road. So it could be named after an Eurasian. ( Cashin Street nearby, was named after the first Eurasian millionaire in Singapore, Mr E Cashin.who started his career as a lawyer's clerk.) I know of a few Eurasian friends with the surname, Miller. This is just my conjecture of course as I couldn't find any information on Miller Street -- yet.

Just an aside, there was a song popular in the 30s and 40s, made popular again by Manhattan Transfers in the 70s, called On a Little Street in Singapore. One of the singers who sang it was Glen Miller. But of course, it couldn't possibly be named after Glen Miller. After all, Frank Sinatra sang it too,and the street wasn't named "Sinatra". But Miller Street is indeed a "little street".

Anyway, I would not have done justice to myself, my ramblings and pictures on spiral staircases, if I did not include this spiral staircase at Siakson Building (which I have never stepped into and got myself a coach tour, by the way).

Chinatown, where seniors are happiest 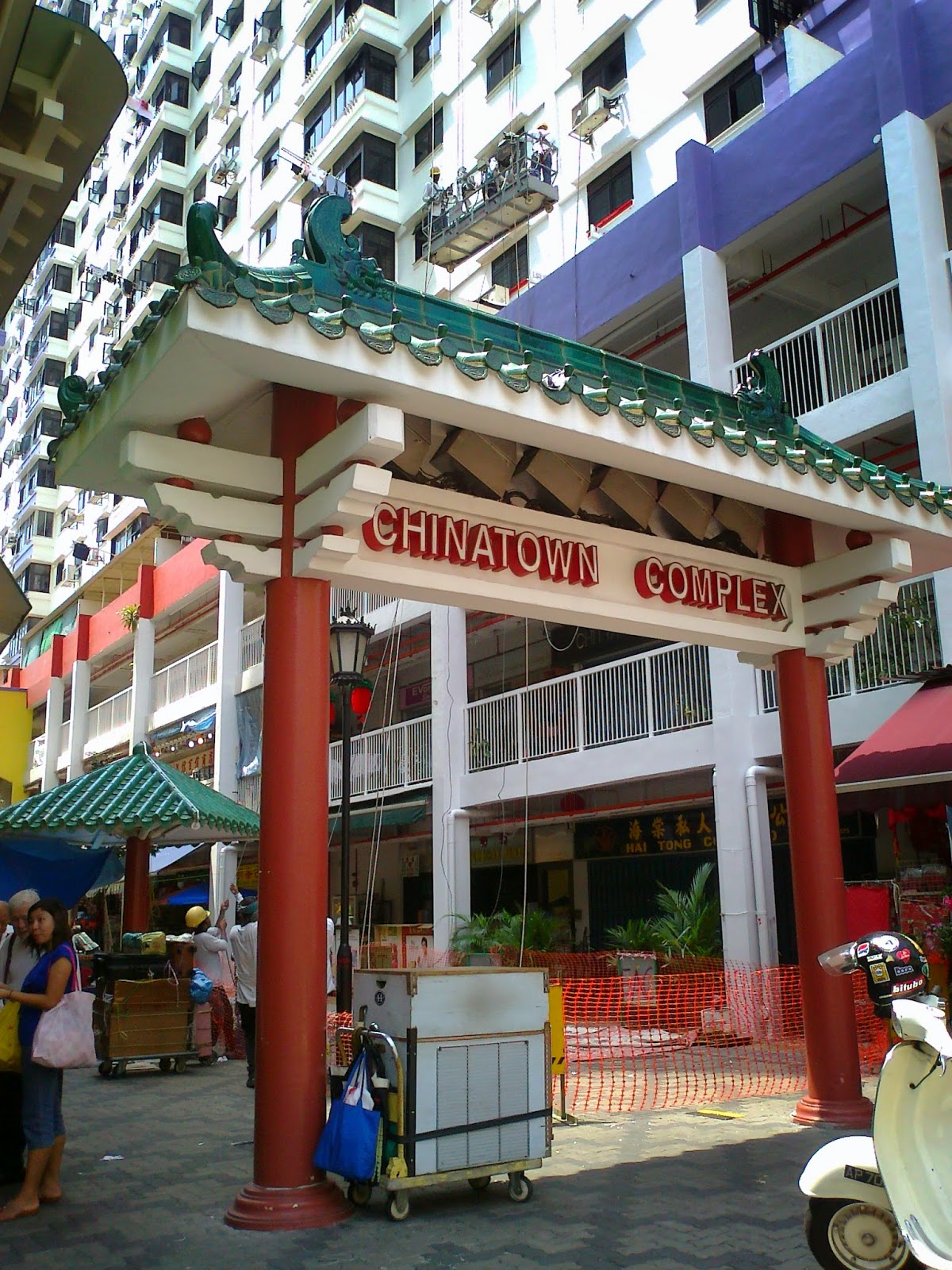 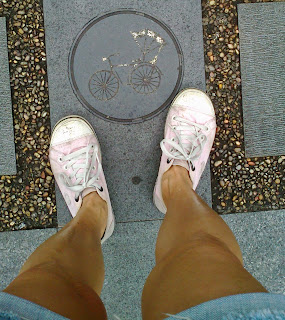 The place always makes me happy, whatever time of the day. On weekdays, the buzz of office workers at lunchtime gives the place an extra breadth of vitality (not that it is lacking). The hustle and bustle is what I like about the place too.


Here are more photographs which I hope, capture some snippets of life in Chinatown.