ACTUALLY, that's not my name. But my mistress likes to call me that, and pronounce it Scare-Re-Dy. Oh well, what's in a name. And just because I howled a little when a group of humans entered the house. I fled to the toilet because... well... I'm not sure why. It's instinct I guess.

Tell you the truth, I'm not comfortable with strangers these days. It comes with age I guess. I am now over a year old. Grown up.  I used to be fearless. For example, when I was about eight months old, I walked into this house like it's my "grand chogong's house" -- grandfather's house. And that's how I got adopted.

Before that, I don't really have much memory. Cat's memory is selective, in case you don't know. Anyway, my new master always thought I had strayed from a loving Malay family -- because I seemed to respond to words like "tidor" (sleep). My new master is a Cantonese and tried talking to me in this dialect. Er, not really my language.


I loved to jump around, take walks and chase birds -- and still do. One day, I was over enthusiastic about a couple of mynahs chirping at the window's ledge. And fell from the 10th floor, landing on the 5th floor's parapet. I dug my claws on to the concrete to prevent myself from falling further. I heard my master calling me from the window as he hurried away to get help. His neighbour from the 3rd floor lowered down a cat bag -- with some tidbits in it. Ah food, never refuse a good offer. And before I knew it, I was pulled up to safety, with a bit of cat food stuck on to my whiskers. They were kind enough to let me finish the last morsel. I was a little subdued over the experience. The next morning, I limped around a bit to get more sympathy. But soon, the whole episode was pushed to a far corner in my little cat brain.

I was having a great time. Meowing in excitement over nothing, and jumping around furniture. I loved to play with my master's mouse and push my long tail in his face at the computer. That's when I got sent off to my current mistress' home. She's the sister. I protested like mad in her car -- all the way to my new home. I even hyperventilated. She kept telling me to "tidor". But I am afraid I don't know what that means. I yowled the whole night. The next morning, I was taken to the vet for a minor op. I vaguely heard the vet asking my mistress whether I was going to be a "kept" cat. If not, I would have one of my ears snipped at the tip. I heard the reply, something like "I guess so..."

It was over before I knew it. My new mistress took me home in the afternoon. I was too sleepy to protest over another car ride.

So now I live in an "apartment" -- not telling you whether it is a private apartment or HDB -- for good reasons. I continue to jump around but these days, I seldom come in contact with strangers, nor those birds which I love to chase so much. Sure, there were lots of things to chase on the floor -- crackling and rustling look-alike birds, mice, fish, and balls with tails. I like the balls with tails best. They are light and can be flung around to hit furniture legs.

BTW, I like doing this in the middle of the night, and in the early morning. If I am really irritating enough, I get tidbits to keep me quiet. But I learnt that if I do it too much, especially in the wee hours of the night, my toys get confiscated. So, you know, best not to push your luck too much.

Findings on a hill


ONE of the oldest temples in Singapore resides on a hill -- or rather, at the foot  of one called Mount Palmer. According to the Southeast Asian Archaelogy: Archaeology in Singapore, Mt Palmer was a former colonial military fort -- and the temple at the foot, faced the sea.

The temple, Fook Tet Soo (also known as the Wang Hai Da Bo Gong Temple), is the oldest Hakka institution in Singapore. It has its origins from a shrine which was believed to have been erected in 1819 (the year of Sir Stamford Raffles' arrival in Singapore). The actual temple was built in 1844 -- the oldest Tua Pek Kong (name of the deity) temple in the island.

I decided to pay this temple a visit on New Year's Day. Besides two or three devotees offering joss sticks to the deity for the period I was there -- there was also one very busy caretaker -- or at least I think he was one though he was dressed more like an office worker in white shirt and brown pants. Perhaps he was a volunteer worker. Anyway, he was very busy, running from one corner of the temple to another, either sweeping up some bits of litter and dust, or refilling prayer oil and putting more amulets in the glass case.

Remnant of a hill still backs the temple. But the shoreline is long gone. The little hill was part of the Parsi burial ground which was exhumed some time before 1966. The Parsis community of merchants lived around the area. No wonder, there is a Parsi Road opposite Palmer Road (separated by Shenton Way).

Tua Pek Kong is a protector of the people. Before he was immortalised, he was a Mandarin (during the Zhou Dynasty) -- an official whose helping hand must be dearly appreciated by his countrymen. After he became a deity, the Jade Emperor sent him back to earth -- once again, to protect the people. Hence the first thing that immigrants from China on touching Singapore soil was to erect a Tua Pek Kong shrine so that the deity could look out for them. 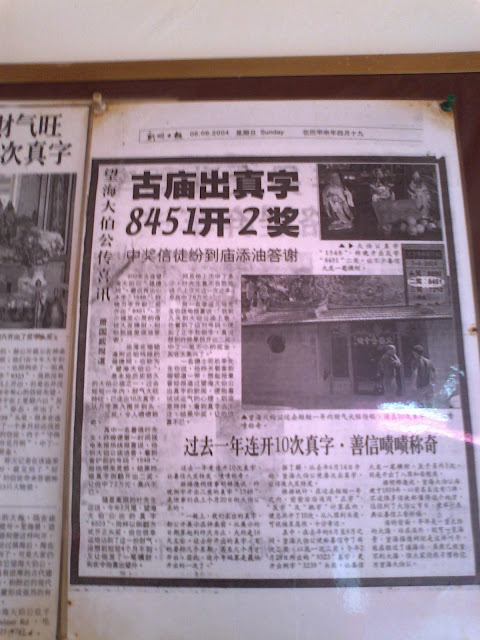 According to some Chinese newspaper articles displayed at the temple, the deity does look after its people -- in more ways than one -- some devotees had made some money from lottery numbers given by the deity.

It must have guarded its land well too. This temple is one of the rare ones which had remained in its original location. In the past, many temples were re-sited due to development.

The Tiger God lives next door to the main temple. Countless wind chimes from devotees hung from the ceiling of his parlor. This deity is worshiped on the 6th and and 16th of every lunar month. People come to this deity for protection against threats and to ward off "bad hats". His mouth can apparently be appeased by devotees stuffing in raw pork, lard and eggs.

At the end of Palmer Road (a dead end) is another "find" -- Palmer House. It used to be old YMCA Metropolitan headquarters which later moved to Stevens Road in 1980. It was built in 1954 and sold in the late 1990s, renamed Palmer House.

For many years, a diving board belonging to the YMCA swimming pool, had remained as a vestige of the headquarters though the pool itself was long gone. One used to be able to see the top of this diving board still while travelling along the AYE on the way towards Changi Airport or the eastern part of the island. Couldn't remember when it too, fell with time. 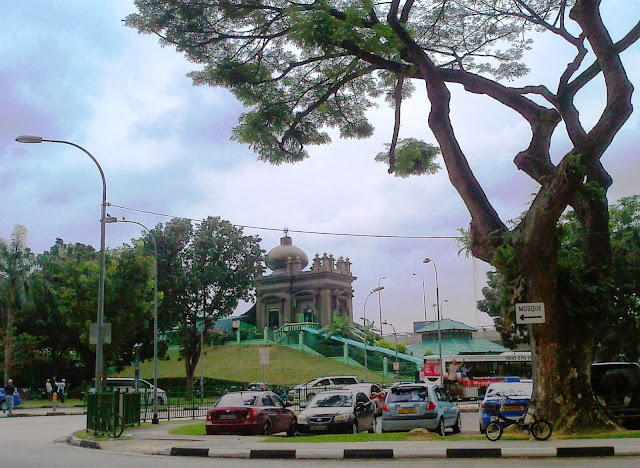 Palmer Road was named after a merchant from Calcutta -- John Palmer. He later became bankrupt and sold off the land. Around the area is another "find" -- the Keramat Habib Noh, the tomb of Habib Noh bin Mohamed al-Habshi, a mystique. The Keramat (above) was built in 1890 by Syed Mohammed bin Ahmed Alsagoff.

There's a coffee shop at the corner of Palmer House that was packed when I visited around lunch time. It must be a popular lunch time place, perhaps especially for drivers of FedEx vans, taxis and tour buses which were parked tightly side by side in the vicinity. Must give it a try some time. 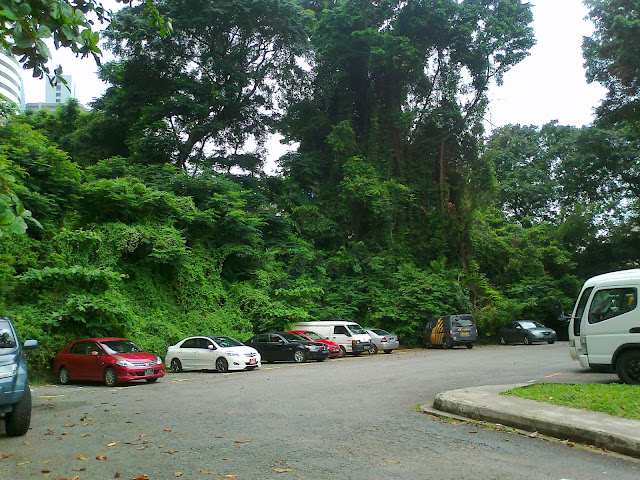