Yet another familiar sight

WHAT stands out for me in this building is the Star of David. This building used to be white with typical, weather-beaten pink roof tiles. Since 2002, it has been painted a beige yellow.

This place takes on a new meaning for me during Chinese New Year -- since I heard from my friend that a shop on the ground floor of the building sells the world's best pineapple tarts. (The famous Rochor Original Bean Curd You Tiao is also just down the road, by the way.)

These tarts, size of a golf ball, can be stuffed into your mouth at one go, though you won't be able to say "gong xi fa cai" after that till you have swallowed it. Indeed, you have to go early to get your tarts or they will be sold out. This year, I got the last bottle -- much to the dismay of an old gentleman who was just a step behind me.

Back to the building: It was commissioned by Jewish merchant David Elias and designed by Swan & Maclaren (the architects who did Victoria Memorial Hall, Goodwood Park Hotel, just to name a few). It was built in 1928 (coincidentally, the year the owner of the other Jewish building commissioned by Isaac Ellison, passed away.)
Posted by Lo Tien Yin at 01:15:00 3 comments:

Cupola where you can have a cuppa 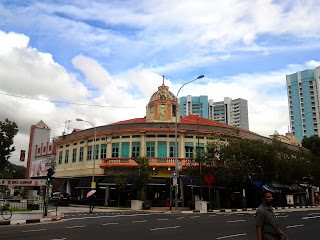 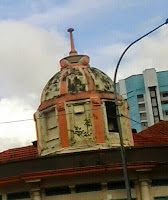 What intrigued me most was the cupola on top of Ellison Building. Well, actually there are two. What does one do up there? Have tea and watch the world go by? My musing in a bus while passing this building each time, proved to be close. Apparently, people did once hang around at the cupola to watch the Sunday races (horse racing used to be around the area, reason for the road named Race Course Road).

The building was erected by a British subject and a Romanian Jew called Isaac Ellison, for his wife Flora, in 1924. Well heeled, he had come to Singapore from China. Sadly, he died just four years later in Vienna. More about him at this website.

It's great to see that some landmarks belonging to my childhood days are still standing. They may not look exactly the same, but they have retained their old characteristics -- those which have made the buildings pop out and rather noticeable when I was travelling in the bus and looking out of the windows. (In those days, buses were not air-conditioned and you could pull the glass pane down so you could actually get a bit of breeze blowing into your face -- and a good view of the outside.)

Take for example, 69 Boon Keng Road. As far as I can remember, the number 69 has always been huge (some say you can even see it in Batam). I can't be sure, but I think the premises has been used for a variety of businesses. I remember it most as a shop selling bicycles. Today, it is a thrift shop dealing in furniture. It has a Facebook -- intriguing timeline that reads something like "steel cabinets arrived" or simply "Just arrived" (followed by pictures of what have arrived).

Another noteworthy example that withstood the test of time is the fire station along Serangoon Road. Built in 1952, it is still a bright red (typical of fire stations built in the early days.) It ceased operations in 2001. (There's an interesting post on fire stations in Remember Singapore where the history of this fire station was mentioned.)

And of course, there's 1179 Serangoon Road -- Mah Pte Ltd. It sells motorbikes and has great window display as you can see from the picture above. It started as a small business in 1973 at Jalan Besar before moving to its current premises in 1991. Before that, the building was a sort of departmental store selling mostly electrical appliances as I remember buying the very first vacuum cleaner for the house with my first pay check as a daily rated temp. I distinctly remember looking out of the window into the view of the canal that was Kallang River.

No. 1179 is next to another landmark, the National Aerated Water Co Pte Ltd. Didn't it once have a giant Sinalco bottle in front? Or was it Kickapoo? Formed in 1929, it began as a small factory (again in Jalan Besar). It survived the Japanese occupation and became a pte ltd in 1943. It moved to Serangoon Road in 1954. It closed in the 1990s and the building has since been left vacant. You can read about it at Singapore Infopedia. 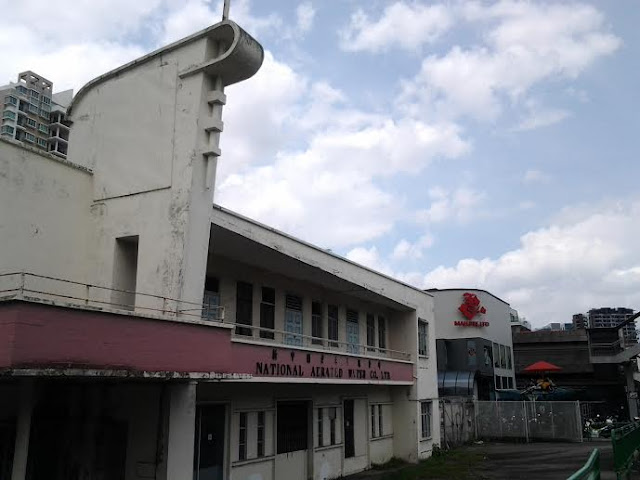