Sultan Gate of the 80s

A HOT afternoon. At a hole-in-the-wall shop, a barber is holding up the nose of a customer to give the area above his upper lip, a clean shave. The customer has dozed off.

The Istana of the Sultan of Johore at the end of Sultan Gate is a sleepy hollow in the afternoon. The palace (built between 1836 and 1843), is believed to have been commissioned by Sultan Allie. It houses a "kampung" of some 200 families -- descendants of the royal family and households. (Today, it has been carefully restored as the Malay Heritage Centre, picture below.)

Accompanying strains of "Waltzing Maltida" from on an organ coming from one of the old shophouses at Aliwal Street, the neighbouring lane, is the "boing, boing, boing" of the blacksmiths. They keep hammering on their iron, a fiery charcoal furnace roaring beside them.


For 100 years or so, hammers have sounded at Sultan Gate. Their toil gave the street its native name "Da Tieh Jel" or "Street of Blacksmiths. There are now about 10 of them lining the lane. Most of them are third-generation blacksmiths.

"My grandfather was a blacksmith in Victoria Street. Then my father took over and moved to Sultan Gate. He acquired the shop from another blacksmith who went back to China," Mr Lai Nam Chen, 53, said.

Mr Lai has been running the workshop singled-handedly for the past 30 years, since his father died. None of his children had wanted to continue with the work. But they made up for it by studying very hard -- two are completing their university education, two have graduated and one is going in soon.

"In my time, we all helped with the work. There were six of us. I am number three in the family. We used to live upstairs then, above the workshop. You do not need much skill in this work. All you need is strength," Mr Lai recalled.

Now, he caters mostly for construction contractors. But business is not half as good as before because of the modern metal industry. Already one of two blacksmiths along the street has packed up.

"We will have to move soon. But we don't know exactly when. The landowner has told us that he wants to develop the place," he said.

He only had to pay $40 per month for rent of the working place. He lives with his family at Kim Keat.

There is also a mason in Sultan Gate. There used to be two before but one has closed down, leaving old tombstones, stone mills (for grinding soya bean to make tofu) and boulders lying in a heap at the site, next to a store house.

The surviving mason, Mr Ng Meng Soon, 28, and his dad run the business left behind by their grandfather. "If not for the making of marble tablets for columbariums and a few Malay tombstones, we would have to close shop too," he said.

To keep costs down, they get their granite from demolition sites. They buy them at $200 per lorry-load. An alternative is getting old tombstones from exhumed cemeteries.

At the front of the Ngs' house, a wood and zinc affair, are two granite structures (called stone drums in Chinese -- carved in the shape of a drum supported by an intricately carved pedestal. They were retrieved from an old clan association at Cecil Street, said to be over 100 years old. Father and son are waiting to sell them as antiques. There is also a splendid marble tombstone from an old graveyard at Bedok.

"Before we were not allowed to use any nail to reinforce our house because it was considered a temporary shelter. Since we could not nail the zinc roof down, we had to rest boulders over it, so that it would not go askew or fall off. Our house was lucky to have survived the Japanese bombing. It was quite bad. A 50-lb bomb landed not far from us. A public water-stand outside our front door was destroyed.  A girl washing clothes there had her arm blown off.  If you look carefully, you can find that some of the houses along this lane have dents on them. They were caused by the bombing," said Bee Ba, 55, Meng Soon's father.

The Ngs have not been told to leave yet and have not started worrying. They continue to knock at their stones below a shady tree. They are very proud of this tree -- it is the only one of its kind around the place. They planted it 15 years ago as a pointer to their house.

"It fruits without flowering, that's why it is called the "wu hua guo" (no flower fruit) in Chinese. It bears fruits the whole year round. Only trouble is that the soil here is too dry and the fruits do not ripen. They are supposed to be very sweet," Meng Soon said.
After note: Redevelopment of the area came in the 1990s. 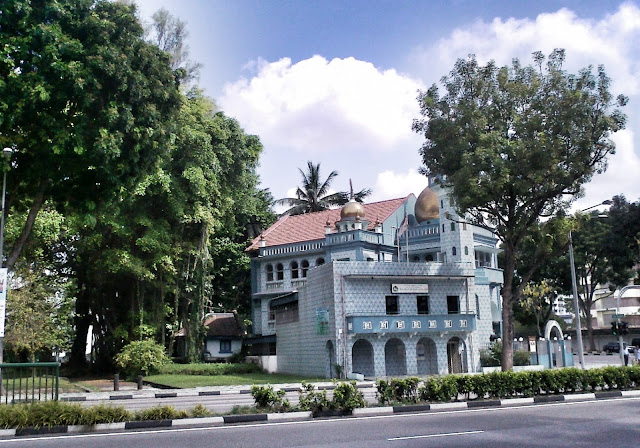 It’s really a nice and useful piece of information. Thanks for the share.
ming green marble Tile