Something about Patrick Tse 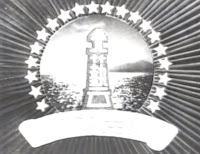 JUST as familiar to me as the MGM lion, is that beacon and its signature fanfare before the start of many black and white Cantonese movies made in Hong Kong around the late 50s and 60s.

I have been watching quite of lot of these movies which some kind souls have uploaded on YouTube. Especially those starring Patrick Tse with Nam Hung and Kar Ling. If there's anything unchanged about Patrick Tse, it is his inimitable style of walking -- a stylish saunter (especially when he turns around, reminding me of a model doing a catwalk). And that smile (which his son, Nicholas Tse also sports). And of course, his voice -- a little high-pitched and nasal (unique in a nice way, not shrilly nor squeaky). No one else has that voice.

The credits for those old Cantonese movies were at the beginning instead of the end. And they always started with the director, the script writer, even the light and sound man before they came to the cast. And instead of those fine prints we see today, the credits were huge and bold. No wonder even directors were household names then, not just the stars. Anyway, the names in the credits were almost the same for every movie -- and it might be a bit difficult to forget them!

There were just two words: 再会 (good bye) at the end of the movie. I can imagine the audience in those days getting up from their seats as these two words flashed, dabbing their eyes (if the movie is a tear wringer).

Not sure if I was wrong, audience in Hong Kong seemed to be more emotionally drawn into the movie than those in Singapore. When I was in Hong Kong (a long time ago in the 80s to catch the Alfred Hitchcock festival with a friend), the audience was clapping and exclaiming or screaming.. I didn't see such reactions in Singapore.

But I seem to recall how we used to joke about the audience in the good old days crying out "Helor lai lor! Helor lai lor!" (here comes the hero) when the good guy appeared to bash up the villain. This would be followed by clapping.

Where did this audience disappear to?

Yes, the beacon icon graced the opening of many old Hong Kong black and white movies. Watched many a movie on youtube too and I was liked a child again way back in the sixties glued to the scenes on our old Philips tv :)The only time I remembered when the audiences responded with loud cheers and claps was in the show "The One-armed swordsmen" when the hero "Wang Yi" came to the rescue of his master.

Wow, I don't remember the audience doing that when I watched the movie :) I recently saw Patrick Tse dancing with Siu Fong Fong (the video was uploaded sometime ago). They were very good! There was a more recent one that shows Siu Fong Fong dancing a tango (I think) with Aaron Kwok. She said she was deaf and couldn't hear the music and so had to rely on Aaron Kwok to lead her. They were very good too.