Is there a Gestetner in the house?

WE had one in our home when we were kids. Hence, I could pronounce this three-syllable word even before I learnt to pronounce other simple words in school. (Of course, I could also pronounce Kelvinator, the now rather antique bramd of our fridge, but that would be another story.)

My parents ran a correspondence school in accountancy. Their office was a room at home. And every other night, the sound of the Gestetner hard at work, duplicating copies of lesson notes, could be heard. And later on, we would sit in a circle on the floor to sort out the notes and then staple them into sets. The final touch was stamping the school's "chop" onto the top right hand corner of the notes. The sets of notes would then be inserted into brown Manila envelopes and mailed out to the students. 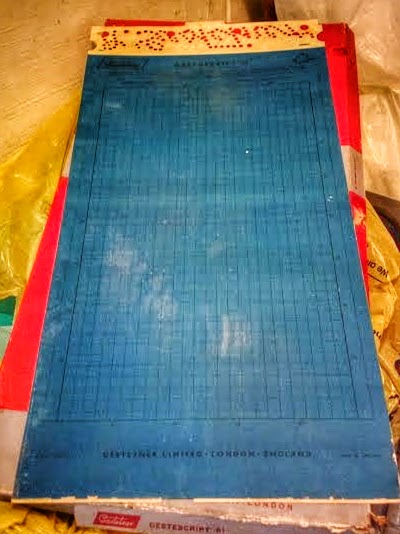 The Gestetner was easy to use. You first mount the stencil over the roller (this could be the most tricky part for us kids). Then crank the handle manually to even out the ink, set the number of copies you want, punch the "go" button... and the machine would go ke-chung, ke-chung, ke-chung. I remember how mum used a special stylus to write on the stencil (a deep turquoise blue -- which was really the colour of the layer of wax over the paper). The stencils she had were specially designed for Chinese characters as they had grids on them. Mum would write a character in each little box with the stylus. Painstaking. There was a correcting liquid (pink colour and smelt really great) which mum could use to brush over mistakes and then rewrite over the spot.

Once, my teacher (I think it was my primary three teacher) needed to print some notes urgently and the school's duplicating machine had broken down. She made an appeal to the class, asking whether we know of anyone who has such a machine. I raised my silly hand of course. Mum was a bit upset because she said she was busy enough already without having to print Science lessons notes for the whole class.

Anyway, the "ke-chung" sound made by the machine had a rather hypnotic effect on me and I would often drift off to sleep listening to it.

In writing this blog, I learnt that Gestetner has since been acquired by Ricoh. (And I just have to add this, Kelvinator by Electrolux.) But a bigger find was that, in Googling the word "Gestetner", I came across this moving story on the life of an Irish man working with the Gestetner branch office in Singapore (which was then in Cecil Street). He eventually became a prisoner of war held in Changi and later, in Japan. It was told in a fine manner by his grand daughter with a lot of love, and without too much dramatic overtones. Here's the link, if you are interested to give it a read: J B Dunne... A life well lived.

IT is very nice of Singapore to retain some remnants of the past -- especially the "gateways" -- entries to a world so different, and for some, so full of memories.

The New World Amusement Park at Jalan Besar also had an arc as part of its gateway. The structure was retained though the site was redeveloped into a condominium and shopping area. Then of course, there's the Gay World (once also known as Happy World) at Geylang Road, next to the old People's Association headquarters (which has moved since 2009). This one did not have an arc though as gateway. And nothing of its past to remind us of its existence. I must go there to take a look soon, to see if I can find any traces which Time did not erase.

I remember Great World most for its ghost train and merry-go-round. Mum would stay outside as dad went on the ride with me and my brother. I loved the way the skeleton with green eyes suddenly popped out as the train chugged along the dark, dark tunnel. Those days, we never knew that the site was once a cemetery (in the 1920s). Dad put an end to the train rides because he once got his finger snagged by something in the darkness (he didn't quite know what). So, he said, no more train rides. Dangerous.


The Gay World and New World brought back later memories of childhood. Mum and I would take the No. 9 Tay Koh Yat bus from the bus terminus at Serangoon Gardens to the terminus at Geylang. The bus terminus at Geylang was a dark road. We would alight into the darkness  and then walked a short distance to the amusement park. I think it was about 50 cents from Serangoon Gardens to Geylang. Anyway, it was the maximum fare for this bus service. The ticket was a bright orange colour. ( I used to collect bus tickets and the orange tickets were my favourite.)


Those days (60s & early 70s) Gay World was always having "expos" -- and mum would go there to look at furniture, crockery, materials (for sewing)...  There was also a stadium at Gay World where they had basketball matches and boxing. I remembered watching a boxing match with mum -- tickets were courtesy of an old friend of dad. (Mum quite like to watch boxing and sometimes she would watch those late boxing shows on TV.)


We didn't go to New World at Jalan Besar often. But I remember badgering mum to watch Madam White Snake at one of the cinemas there -- starring Linda Lin Dai as White Snake and Tu Chuan as the Green Snake. We missed the first screening at the big theatres (1960s) so this re-run (in the 70s) must not be missed -- come hail storm or floods.

Come to think of it, this old cinema was popular (to us) for its old Cantonese films. Our favourites were, of course, the sword-fighting ones starring Siu Fong Fong, Chan Poh Choo and the older Yu Soh Chow. The "handsome" male star -- inadvertently -- was Jiong Ying Choi (a bit on the fat side, especially obvious in scenes showing him running up mountain paths). He was always the good guy and Chou Tat Wah (who always acted as detective in more modern films) was usually the bad guy. More commonly though, the bad guy was Liu Yan (the villain opposite Kwan Tak Heng in Wong Fei Hung movies).

ABSOLUTELY thrilling, those spiral staircases of the past. You can still see some of these now in back alleys. Among the spiral staircases of my childhood was one belonging to a shophouse at Serangoon Garden Way -- among the row where the famous late Dr Fernandez had his practice. I believe they are there still. (In the old days, shophouses each sport a spiral staircase at the back, as a fire escape.)

My old primary school friend used to live in one of those shophouses with her mother and younger brother. She became the top girl the moment she started school. But I got to know her only in primary six when I was good enough to be in her class! I have heard of her fame even when I was in primary 4. Her mother was fantastic in knitting sweaters and scarves -- aided only by a hand-operated machine that I remember, had combs with wool interwoven among their long teeth. She only need to move the combs and the wool would form into patterns and get longer and longer. Until this day, I am not sure how that machine works. My friend was very good at knitting too, besides her studies. (I think she went into medicine after her A levels.)

I visited her quite often and we would enact scenes from Enid Blyton's Famous Five or Secret Seven. We would pretend to sneak out of the house, using the spiral staircase -- and into the backlane -- out on another secret mission.

Another spiral staircase that emerged from even deeper memories, belonged to a shophouse whose owner must be some dealer in Chinese medicine as he was always giving my dad a supply of things like Tiger balm, Bobo tan (Bobo pills that have this fat baby as trademark on the label) and Jin tan (small, rounded silver pills that have a peppermint taste). While my parents were chatting with him (must be an old friend), I vaguely remember looking out of the window into a small courtyard which the spiral staircase led to -- and this fascinating sky well that let in shafts of sunlight forming patterns on the wooden floor.

And each time we visited, the boss would give us trinkets -- pendants and chains made from plastic. One was in the shape of a one-inch square, with a picture of a windmill. The surface was gritted and gave the illusion of the windmill blades moving. On the back of this pendant was an advertisement for Bobo pills.

Each time I see spiral staircases, I have only good memories.