The shrine that travels from Zheng Hua to Jurong

The chicken in the cage reminded me so much of the wet markets of my childhood. I have not seen a live chicken for a very long time.

I wonder what a lone chicken is doing here in this temple called the Jin Fu Gong (Jurong West). For the next offering, I guess.

Anyway, this temple had its origins in a shrine that was rather far away from the temple's current premises -- at Zheng Hua Village (Bukit Panjang).

In the 1960s, residents of this village found a statue of Tua Pek Kong and a shrine was erected round it, known as Kim Hock Keng (Jin Fu Gong) -- Golden Luck Temple. It was known for its well -- people drinking its water were said to be cured of their cough. With development in the 1990s, the temple was re-sited in Jurong West.

In looking up the temple's origins, I came across this blog which described Zheng Hua Village so well, with such interesting anecdotes and lots of old pictures: Diary of a Singaporean Cabby. The author also described the wet market there -- which made me think of the chicken I saw at the temple.

Hooked on a little shop of wonders


I can spend hours in a provision shop, pouring over their goods and visualising what I can do with some of them. The bigger shops combine hardware with sundry goods -- which is great. So you wander around the shop, from Brands essence of chicken, dish washing liquids to pots and pans and then to one of my favourites -- various kinds of hooks for hanging various things. These days, there are hooks and hooks.

But thank goodness, provision shops don't try too hard to keep up with the times. They play songs you can tap your feet to -- like Sukiyaki -- though most of them have cash counters and even Nets service.

But I know of at least one which still uses a rusty can and pulley, operating in the heart of a HDB estate. The boss insists that this relic be used instead of the cash register. Probably in his late 70s, he has a full crop of white hair. Hale and hearty, you can see him almost every day, fanning himself and seated on a wooden crate while his two daughters managed the shop. His wife occasionally emerged to help out.

Did you catch "The Provision Shop" on channel 8 last Sunday? I think the idea is great -- with the provision shop and the characters reflecting a rapidly changing Singapore. Indeed, the provision shop is one of the last icons in retail (and service) with the "personal touch". (I once borrowed a ladder from them.)

The telemovie's centrepiece (for me) was the honest look into the relationship between a Singaporean and a foreign worker -- and the rapport and understanding that came too late.

Overall though, I think the storyline is a little contrived and doesn't capture my attention as much as the interviews given by Royston Tan. He is a great storyteller and very captivating -- like when he talked about his childhood at his family's provision shop in Lorong Chuan -- and when he talked about his philosophy in film making. I love the props (some he had saved from those days) -- tikum-tikum, packets of snacks (are they still edible?), etc.

Wonder if he kept some of those tubes of gel that came with a small straw? You press the gel (which came in many wonderful colours) into a ball shape at one end of the straw. You blow from the other end and voila, the gel grows into a balloon. (Alas, to the disappointment of many kids, the balloons being transparent were not as colourful as the gel.)

Perhaps I'll find them at Rosyth Road, the provision shop where the filming took place.
Posted by Lo Tien Yin at 01:49:00 2 comments: 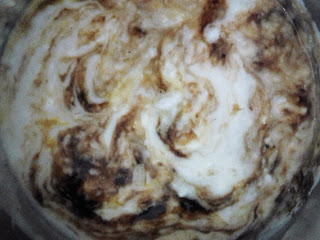 I have always liked oats. Mum used to make oat porridge for us when we were sick. Those days, there were no quick cooking oats and she had to boil the oats for a long, long time. Then when it began to thicken, she added a bit of condensed milk, and beat in an egg.

Recently, I got some quick cooking oats. It thickens within 2 minutes when the water boils. Add a bit of coconut cream, then sprinkle brown sugar on top. Let the sugar melt a little before eating. Baristas can try making a pattern on top like they do with coffee :) 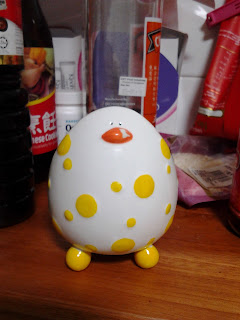 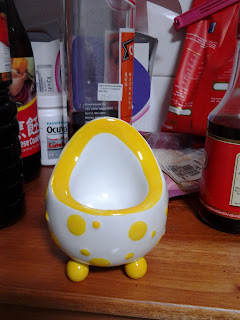 Isn't it cute? Meet my first egg cup, Chubby Chick. Cost me only $8 as it was the only one left on the shelves. And its beak (if you look closely at the picture) is a little chipped. Original price was $15.

I've never owned an egg cup in my life. When I was a kid, I would have my soft-boiled egg perched on a whisky glass. As the whisky glass was really tiny, the egg yolk would run over. I hated that.

The glasses, if I may add, had never been used by anyone for whisky or brandy except our "ancestors". Two such glasses were filled with a shot and offered to our ancestors on the eve of Chinese New Year -- together with a whole cooked chicken that would have a sprig of pine leaves (from the tree in our garden) in its beak.

There will never be another book store like MPH -- the old one at Stamford Road. Although there is Kinokuniya and bygone ones like Towers and later Borders. But nothing beats the old MPH with its heavy glass and wooden swing doors, a staircase with smooth wooden banisters that led up to the cafe. On a hot or rainy afternoon, you could take refuge in this cafe (I think it was called the Books Cafe) -- huddled up with a book you have just bought -- and a sandwich or some potato chips and a Coke. A bonus if you had a seat by the window. There was no place that could cheer me up as much as the old MPH.

Passed by recently and was reminded of happy days spent at this place. The last 'event' for me there before it closed was meeting a former colleague from long ago -- by chance -- drinking coffee with his wife. He hopped to my table -- a very earnest young journalist turned teacher. Not sure whether he is still teaching today though.

There used to be a branch at Parkway Parade which I visited everyday during lunch when I was working at the old Marine Parade library, eons ago in the 80s. While still enjoyable, it had a very different feel from the old MPH, But of course.
Posted by Lo Tien Yin at 02:07:00 4 comments:

'Over the hill' ride at Chun Tin

Great treat on a rainy day

I don't know why, but I usually walked past this shop at Hong Lim Complex, looking at all its wares but somehow never got down to buying any. But it was raining after my bak kut teh lunch nearby, and I was still hungry. So I thought I should buy my favourite tau sar piah from the shop, Poh Guan Cake Shop, eat it quietly under a shelter, and watch the goings-on (which weren't too many) at my favourite watch shop (probably a very old establishment as well -- a small shop which only charges $5 for changing your watch battery). Oh yes, Poh Guan Cake Shop is rather old -- opened in 1930 making simple Hokkien goodies like peanut candy. Now, it has the widest variety of traditional kueh-kuehs in Singapore. OK, I may be overstating...  but it does look like it has a lot, from the simple steamed brown cakes to sticky flour nuggets called sak ke ma (Cantonese).