Clothes from a childhood wardrobe

THERE it was, a rectangular box lying on the dining table, looking spectacular. Mum was sitting there, smiling broadly. This came from Auntie, she said. The auntie who lived next door, and my Chinese teacher in school. (She was all praise for me when I could write the word "come" in Chinese on the blackboard. That was in Primary One. But I am afraid her faith in me was misplaced. As my Chinese grades later went all the way down hill, especially for "听写" -- Chinese dictation.)

Till this day, I am not sure why she decided to give me this dress. It wasn't my birthday or anything. But it was the grandest present I had ever received. The dress was made of foamy chiffon material with tiny blue and pink rosebuds dotted all over. It had a long skirt -- elasticised at the hem so that you could fold it up underneath, all the way to the waist, so that it formed a balloon skirt with great flounces. It had tiny puffed sleeves, with narrow organza lace edging the collars.

It lasted a really long time because the balloon skirt could be let down -- and down until it was no longer a balloon. And when I had grown too big to slip into the dress, I cut off the top part and just used the bottom part as a skirt.

Actually, before this dress, there was another present from Auntie -- a pair of knickers with tiny flowers and layers of frills all round. I wanted to wear it as a skirt, but my mum didn't think so. 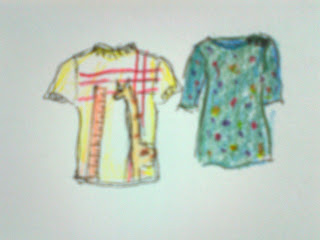 I didn't have too many occasions to wear such a grand dress. But I remember wearing it for the family portrait at this studio called Snow White in Serangoon Gardens. My parents also told the photographer to take a few shots of me wearing this dress sitting on a round rattan chair that graced every photographer's studio in those days (the round rattan chair I mean, not my portrait). I think they wanted to do justice to the dress.

My usual attire was t-shirt and pyjama bottoms (at home) and t-shirt and shorts (when outside). Two of my favourite t-shirts are shown on the left. In fact, my parents bought me two t-shirts of the giraffe pattern, with one a size bigger. I wore them for the longest time -- probably the reason why I could remember them until today. The other one had tiny balloons all over it, with buttons on one shoulder. It was several sizes too large -- so I wore it for a real long time as well.

My father also bought me a swimming costume from Australia, where he went for a surgery. It was made of cotton, elasticised all over to form little puffy patterns. I think it was meant to be worn as bottoms but I could pull it up all the way to the chest. We seldom went swimming, so it was not used at all. But I kept looking at it and thinking of all sorts of ways to transform it into a skirt or blouse -- or something I could wear everyday.