To all the shoes I have loved before 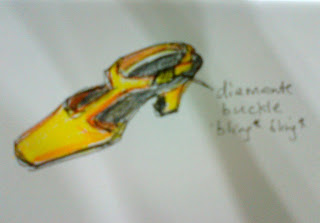 My first pair of "glam" shoes bought at a shop called Sin Sin (if I remember rightly, or it could be Xin Xin) at Maju Avenue. They were made from mustard coloured suede and had diamante buckles at the straps. It was THE shoe shop for residents of Serangoon Gardens in the late 60s till the 70s. You could get Scholls there at a cheaper price than elsewhere. I know my classmate's mum used to come all the way from 6th mile (Upper Serangoon Road) to get her pair of Scholls. 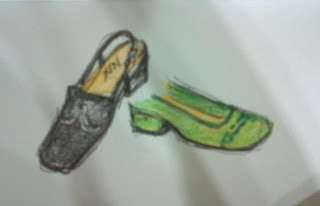 The  black and green pair were bought after I retired the yellow pair. Actually, there weren't many occasions where I could wear the yellow pair and they were retired in reasonably good condition. The black and green pair were worn to work as I managed to get a daily-rated job after my O levels while waiting for results to get to Pre-U. They were supposed to make you look grown up. The green pair didn't have a sling back and the covered heels chaffed quite badly. However my mum liked them and took them over from me. She usually wore stockings, so her heels didn't suffer from the covered heels. 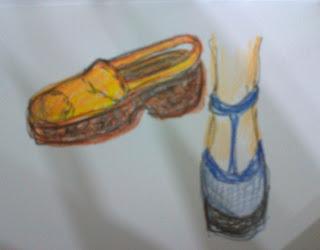 Sometime in the 70s, platform shoes became popular. The beigey pair gave way as I was returning home in the rain from Sunday School. The platform got disengaged and I found I was just wearing the upper part of the shoes. In the end I threw them into the nearest dustbin along Tavistock Avenue, and walked home barefooted -- and in the rain. It was rather fun.

The blue pair made from denim with shiny dark blue straps, was the most comfortable platform shoes I ever owned. But after taking my X-ray at SATA which was then somewhere off Shenton Way, a car reversed as I was standing in the carpark with my friends. Somehow the strap of my shoes got caught in a spoke of one of the rear wheels. It snapped. And it was my favourite pair of shoes! The driver offered to pay me for the shoes. But of course, I refused to accept. I specifically remember this incident because of the X-ray I had to take. I had applied for a job with the civil service after my A levels and if you were asked to go for a medical checkup, it meant you were being considered for the job. So what was a torn shoe strap -- hey, a job offer was in the pipeline.