THE "god makers" worked very hard into the night -- a little glow of activity in the darkness along Gemmill Lane as the wood carvers chiseled at their blocks from which images of Chinese deities would emerge. An entire pantheon of deities from Chinese folklore and mythology filled the shop -- their beady eyes looking from the glass windows into the busy traffic outside.

There used to be two of such shops run by brothers. One at Gemmill Lane and the other at Club Street. The one at Club Street, "Say Tian Kok" was started by the father since the pre-war days, continuing the trade started by their grandfather in Quemoy. When the father died, the sons took over the business. The younger brother continued to man the original shop while the elder brother, Ng Tian Sang, having picked up the art of carving since he was 12, opened his own shop with the signboard "Say Tian Hng" at Gemmlll Lane.

Redevelopment at Gemmill Lane must have started around the late 1990s. Both Club Street and Gemmill Lane are now lined with clubs and eateries -- much blogged about and highly rated -- food good enough for the gods you may say.

A Google search yielded a Say Tian Hng Buddha shop at 35, Neil Road. I am not sure whether it is run by members of the Ng family. Will check it out soon.
.


Tales from the carver's wood 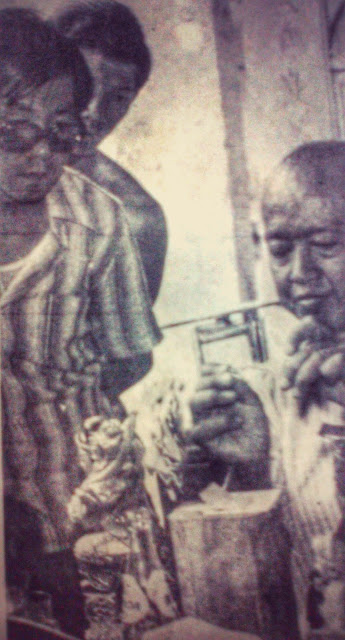 Business for the Ng brothers was good, often receiving wholesale orders from kampongs and temples when they required idols of their clans' god. The god overseeing the welfare of various clans take on the surname of the clans. For example, for Goh clans, it would be "Goh Yuan Suay" (yuan sua meaning emperor).

An image, about 10 inches tall, can fetch up to $300.  The idols were made from camphor or sandal wood imported from Malaysia and Thailand. Ng preferred  to work with sandal wood as it is harder and more durable. The remaining bits and pieces were made into joss sticks. The sap from camphor wood made his fingers itch, he said.

The wooden sculpture is coated with "mian ji" a thin, porous soft paper. One of two layers of very diluted plaster are then painted over the carving, to ensure that minute cracks are filled and rough surfaces smoothed. Intricate patterns such as folds of robes and clothes are then added. A viscous mixture of black powder with adhesive quality is  beaten thin and pliable with a wooden board and then rolled into thin strands which are stuck onto the carvings in the design required. Thin foils of gold may also be pasted over to make a dazzling robe for the deity. You hear of idols being stolen from temples? The gold melted down from their robes were probably the target.

The "Lung Huan Tee Ju" or the Land God is depicted holding a white stick, a symbol of mourning for his father. Ng did not like to carve this idol as he thought it was bad luck -- but there seemed to be some demand for this deity as it was believed that he brings wealth to those who have his idol at home. When this deity was a mortal, he was a spoilt and pampered lad, indulging in vice and frequenting the brothels. One day, he was summoned home from the brothel as his father was dying. When his father died, he had to be forced into mourning clothes and dragged to the wake.  After the wake, he hared back to the brothel, still in his mourning clothes. (This doesn't sound at all like a moral tale to me, unlike the many I have heard and read about in Chinese mythology... Perhaps I didn't get the complete story. The son could have repented and when he became a deity, held the white stick as a mark of repentance. But this is my own conjecture.)

Ng also made ancestral tablets, and he has this tale to tell:

In ancient China, there lived a very wayward son by the name of Ting Lang. He left home after a furious quarrel with his mother. However he had a change of heart and returned home. The mother, thinking that he had come to kill her, was so grieved that she jumped into a well. Ting Lang was brokenhearted. A piece of wood surfaced from the well, but he could not find the body of his mother. Taking the piece of wood, he engraved his mother's name on it and placed it on the altar in his house for remembrance.

This deity "San Tei Kung" is carved sitting on a boulder, one leg resting on a turtle and the other on a snake. He has a fierce red mien, jet black hair and beard. When he decided to become a saint, he disembowelled himself (to indicate his sincerity). The snake and turtle represent his entrails.

Known in dialet as "Ji Tian Da Seng", he is usually carved with a big peach in his hand, or with the right hand shielding his eyes (the better to look out for demons and spirits). In the legend, Journey to the West, he protected and escorted the Monk to look for the holy scripture -- their journey fraught with dangers as they encountered all sorts of spirits.