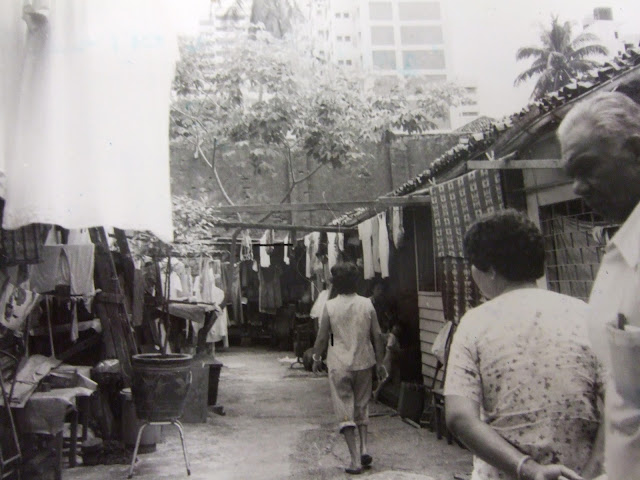 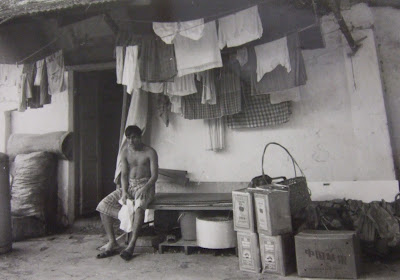 THEY were kampungs in the heart of urbanity. Lorong Serai, Lorong Pantai and Lorong Sakai, for example were offshoots from Bencoolen Street. Their existence is now alive only in my memory -- of long bus rides towards town where I would peer into the intriguing world of people living in those lanes (usually on bus No.105 or was it 101 which started from Serangoon Gardens to Jalan Besar, then through Bencoolen Street to Bras Basah Road and then past Fullerton Building and Clifford Pier, to Shenton Way).


Entry into these kampungs was through "openings" along the rows of old shophouses lining both sides of Bencoolen Street. In between units, a "gateway" would suddenly appeared, leading into villages that did not seem to gel with the modern concrete surroundings.

When I was a reporter for The Singapore Monitor, I did a series on places in Singapore during the newspaper's "phantom" days -- so called because we were all working for stories to produce a "phantom" paper in preparation for the day we would become operational as a daily.

After the paper shut down in 1985, the news editor, Margaret Thomas, was good enough to give me back my folder. They were scheduled to be published, accompanied by whimsical sketches by another journalist. But before the journalist could work on the sketches based on the photographs I had taken, the newspaper had closed.

Today, there are absolutely no traces of these "lorongs" -- not even just the name plaques (unlike Malay Street and Hylam Street which at least existed, even just as a street name within the very contemporary Bugis Village).

When writing this blog, I did a search for some of the long-gone "lorongs" of this area and came across one article in The Straits Times in May 1940. There were two Lorong Serai in those days -- one in Paya Lebar and one at Bencoolen Street. So they decided that the one in Paya Lebar should be renamed Lorong Tai Seng. There was another Straits Times clipping (1921), an advertisement for the auction of 17 shophouses along Bencoolen Street and Lorong Mandai. And the National Library has a picture of Lorong Sakai.

Life in the alleys of Bencoolen Street

Filed in November 1982 for The Singapore Monitor (but never saw the light of day...).

WHEN Bencoolen, a British port in Sumatra was given back to the Dutch in exchange for Malacca in 1824, a number of Malays from the port came over and settled in the district through which Bencoolen Street now runs. According to S Durai Raja-Singam in his book, Malayan Street Names, most of Singapore's oldest Malays and some Eurasian families are descended from these settlers.

Many residents of Bencoolen's pre-war houses have moved leaving only shops and offices (even as I wrote this story in 1982). Modern roof tops juxtaposed with weather-blackened tiles that formed the roofs over these remaining villagers. These alleys with names like Lorong Mandai, Lorong Pantai, Lorong Sakai and Lorong Serai were reminders of the days of those early settlers.

According to old residents I spoke to, the people here before the Japanese Occupation, used to be prominently by Malays. Residents living in Lorong Sakai were mainly Malay wooden-sandal makers, he remembered. Lorong Sakai which branched from Bencoolen Street towards Prinsep Street is lined by low wooden and brick houses. It seems that once upon a time, the houses were horse stables.

Mr Moh, 66, a charcoal dealer at Bencoolen Street for 29 years, said, "When I came from China in 1925, I remembered people telling me that the horses were taken care of by Malays and Indians for the purpose of pulling carriages. But by the time I came, there were no more horses."

Mr Chan, 51, who ran a restaurant there, remembered being told that the horses were owned mostly by Arabs. Many of the landlords there were Arabs, he added.

At Lorong Serai, one could see from markings on the facade of the houses that ceilings were once higher but were lowered to accommodate an upper floor -- really a kind of attic. The oldest resident there was Mr Hon Jui Kong, 77, who had lived there for 50 years. Previously a pork seller, he had his pork skewered and roasted in the communal kitchen of the village which residents said, was once used to prepare feed for the horses.

The kitchen was converted into a communal bathroom later on, and a new kitchen added next door. When nearly every household acquired a stove, the kitchen was neglected. A giant gnarled tree now possesses the crumbling kitchen and bathroom, embracing them with its hanging roots.

On the other side of Bencoolen Street, towards Waterloo Street, a nameless lane leads to a rather neat and pleasant kampung of some 20 houses. The scene is idyllic -- old women chit chatting under a shady tree, talking rapidly in Hainanese. Most of the villagers here are Hainanese. There are no potholes and muddy puddles. Some years ago, villagers pooled their money together to cement the lane running through the kampung. But Mr Yeo Hui Liang, 73, a resident there for some 50 years, does not mind leaving the place. "My house is too old and leaks when it rains. Each time I have to spent about $50 mending the roof but after a while, somewhere else leaks," he said.

"I hope to get my flat soon. But of course living conditions are much better now. Before we had to fetch water from the main road, but you can pay four cents to have someone bring two pails in for you."

Mr Eric Tan, 28, who grew up there, liked the kampung life. He remembered his childhood as a happy one. He now runs his own import and export business.

"When we were young, we always fantasized about owning the large house next to our kampung. We call it the big house."

But the house in question (58, Bencoolen Street) has long lost its grandeur. The crumbling garage in front has a tree growing in the middle. Once inside, numerous rooms flank the dark passageway which led to a kitchen.
Some 28 families or more share this kitchen. Each family stays in one of the rooms, the doors of which seem perpetually shut. But there are signs of life with laundry hung out to dry on bamboo poles sticking out from the windows. Chinese pop music can be heard sporadically. A stench assaults the nose. The owner of this modern day longhouse seemed to be one Mr Ong but nobody knows where he lives.

More pictures of life in the alleys: 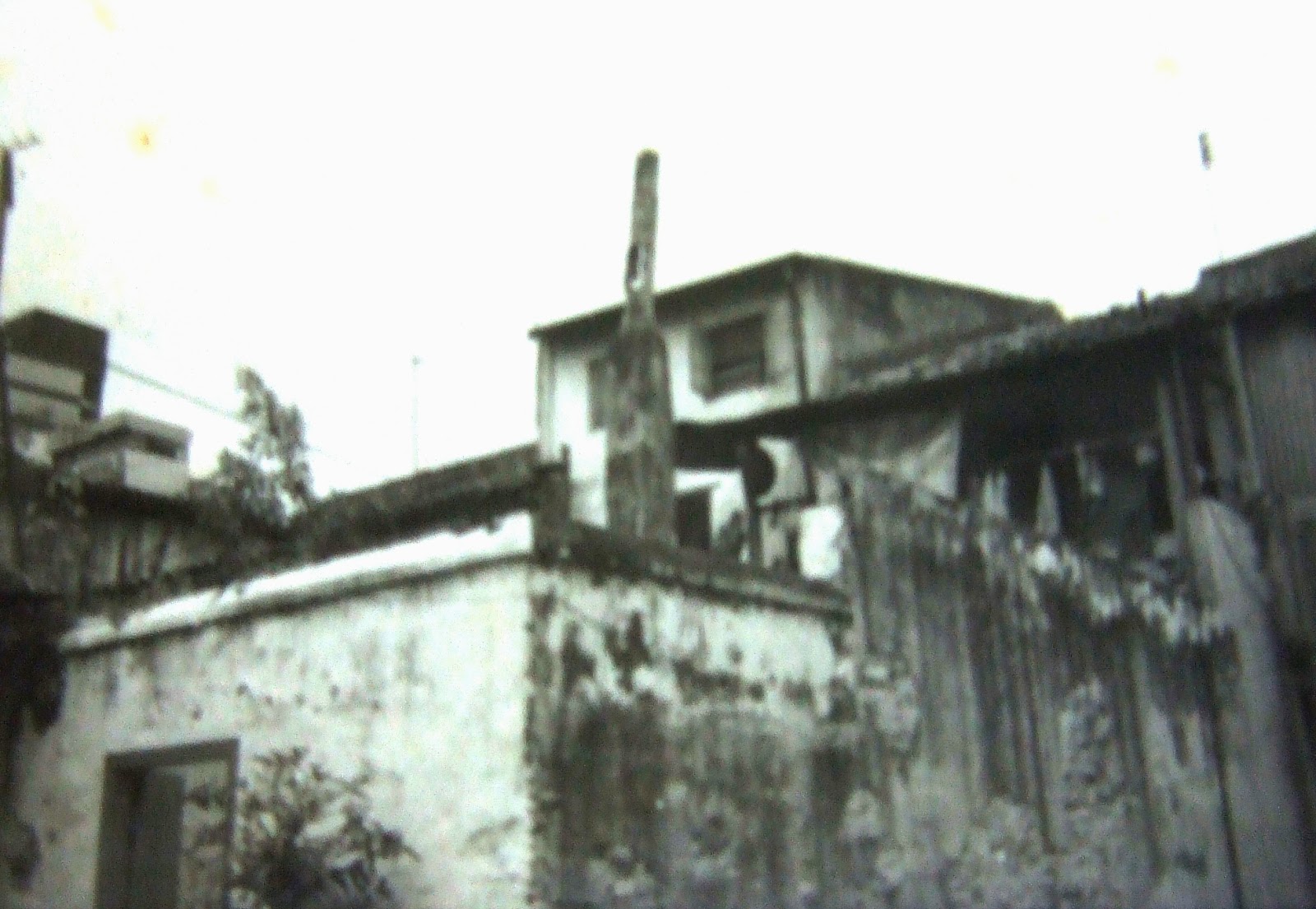 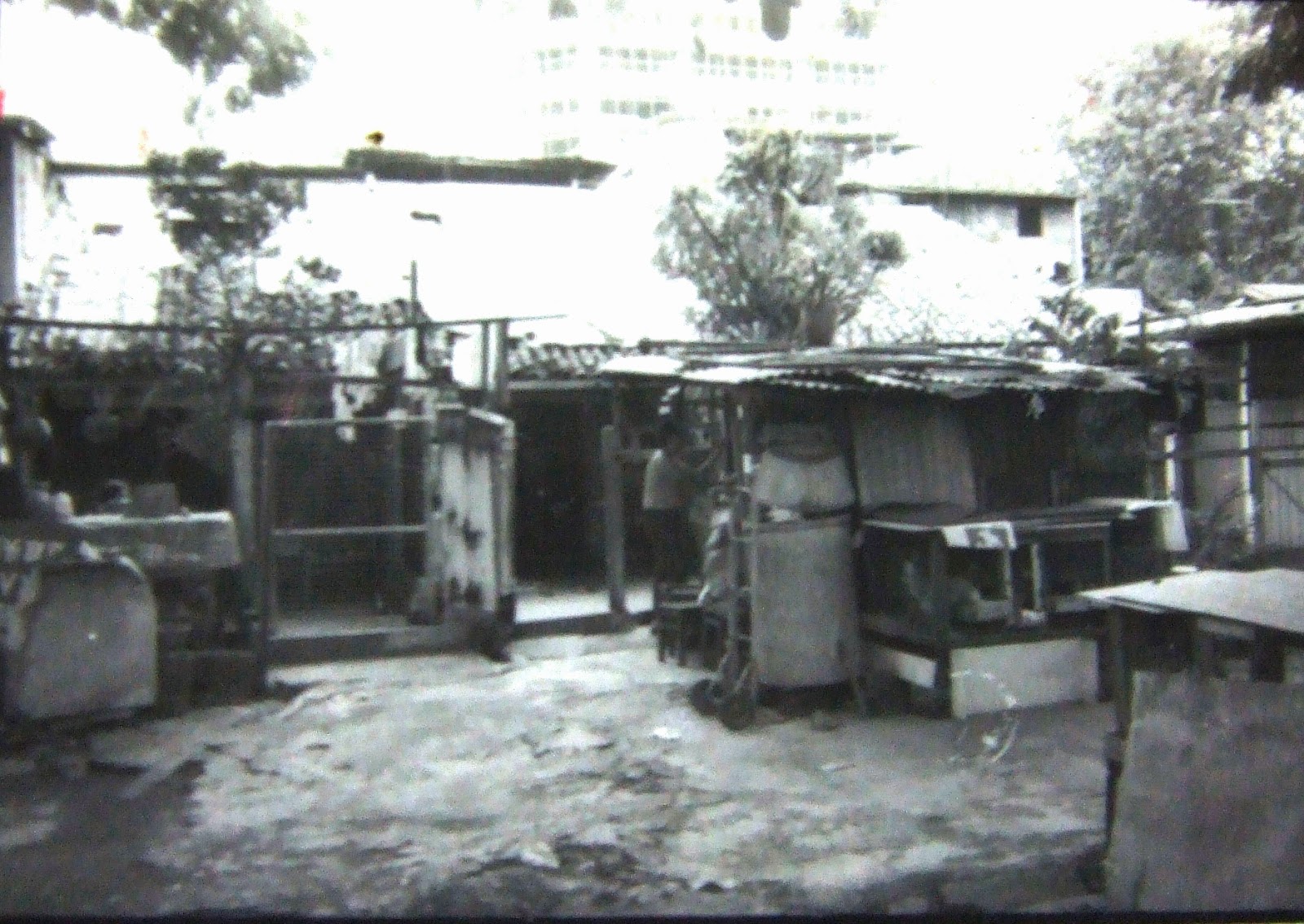 very interesting indeed...the urban tight spaces that provided a roof and life within a city ...but life the same as at the rural areas...