WHY oh why was it so difficult to own a pleated skirt? When I was a kid in primary school, nearly all my classmates owned one. They went round saying "Eh, I got a petered skirt..." Took me ages to find out that a "petered" skirt is really a "pleated" skirt.

And they were so cool... and cheap. Which was why I did not understand why mum refused to buy me one. I saw them on sale every where, from pasar malam to the stalls in the market selling cheap clothes and towels. Surely, surely, mum could afford to buy one for me?

I even prayed very hard for one... and hoped that God would lay it beside me on the bed so that I get a surprise when I wake up. I also begged my eldest brother to buy one for me, but he got me a yellow knitted jumper instead. Goldfish colour, he said, knowing that I had been badgering mum to knit a sweater for me using wool this colour. I liked it very much. And it was more expensive than a pleated skirt.

But I just wanted a pleated skirt. THE pleated skirt of the 60s was made from a plasticky kind of rayon material. They were usually floral  -- I don't remember seeing any at the stores that were plain. I think it may even be waterproofed -- it felt very much to me like thin raincoat material. The pleats were not real pleats but more like folds that were permanently ironed on.

Kids wore them everywhere, even to school excursions and outings. I would show up in my shorts with an embroidered cockerel on the pocket. Not that I didn't like that pair of shorts. My mum bought them from the market. She bought most of my clothes from the market and it was always a big thrill for me when she came home from the market. There was also a pair of pants -- red with black checks. They felt rough against my legs, but I liked them because my mum said I looked like a cowgirl wearing them. Yeeha! 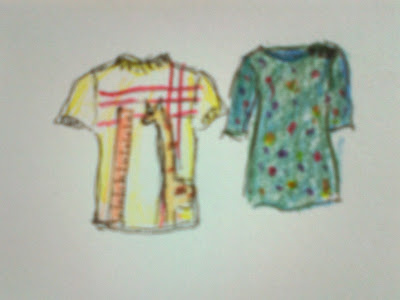 And the T-shirts -- there was one with a cartoon of a giraffe having its neck measured, another with tiny coloured balloons all over. This was a very long T-shirt that reached my knees. I wore it for several years before it finally became the right length. They were not bought at the Serangoon Gardens Market but at this brightly-lit Indian store along a row of shops at Serangoon Garden Way. I think it was near where Dr Fernandez had his clinic. It later became the Mubaruk Book Store, I think. (Although this was called a book store, it sold a whole lot of other things, from imitation Barbie dolls to other toys like match box cars. I remembered I bought my first Barbie doll from there, not the real thing of course, but cost me half a year's pocket money at least.) Anyway, the Indian boss stacked clothes by the loads on the glass shelves. He would take them out one by one out and shook them out to show my parents. How I loved those exciting times!

One day, they bought me a gorgeous frock from another shop along the row at Maju Avenue. It was white cotton with little embroidered flowers all over. It had the sweetest puff sleeves,  and a bow that needed to be tied at the back. But what was more coveted was a huge doll of the same height as me, that the store had on display. It had blond hair, blue eyes... and her hands were stretched out to be hugged. I was sure she could walk. (Walking and talking dolls were the rage then). It must cost a bomb. Anyway, it was not for sale.

But still, I wish mum had bought me a petered skirt.