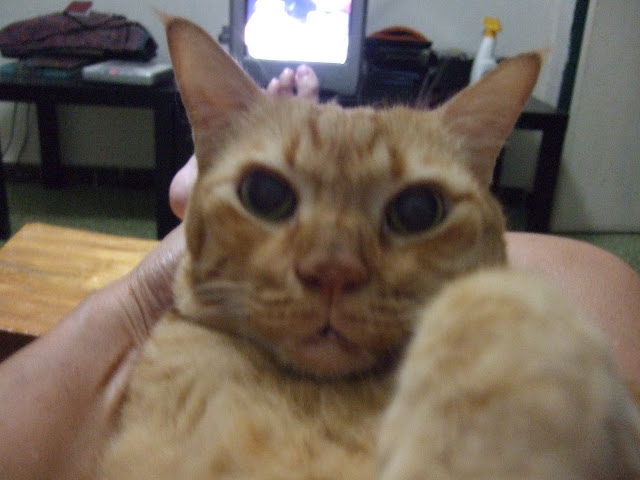 CATS I have a few, perhaps too few to mention...compared to some of my friends. One owns 12 in her apartment... but I think it's 10 by now. I do understand the laden heart that comes with each departure. But like all my big time cat owner friends, I never regretted having those stubborn creatures lord over me.

I have about three cats spread out through my life. When I was a kid, I lured a shy, scaredy cat into the garden by using a toy cat. This toy cat meowed when you turn it upside down. The real cat got drawn to the toy cat and came closer and closer and soon it came through the gate, and I was able to stroke it. I was able to feed it scrap I hoarded from the table. One day, it brought along its kid. My parents agreed to keep them. But trouble started when the mother and child explored my neighbour's backyard, rather regularly. They were not fond of cats.

Dad was keen to have goodwill prevail and decided that mother and child should be sent to the SPCA. The washerwoman offered to help to catch the cats. The mother, wild with fright, fled -- to the neighbour's. I caught it, with tears in my eyes. It bit my thumb in its fright but I calmed her down. She trusted me. And I put it into the sack, along with the kitten. It was a very solemn and silent ride in the taxi to SPCA, with a moving sack at our feet.

Life moved on... The air was a little bit nippy as Christmas was round the corner. I was sitting at my usual favourite spot, at the doorstep of my house, doing nothing in particular, when I heard faint meowing. It came from the covered drain in front of our house. I peered in, and two bright eyes stared back. Bread soaked in milk were dangled into the drain. They were gone in an instant.

Needless to say, the kitten made its way into the house. It grew into a handsome cat who loved to roam the streets outside our house. (It wasn't interested in my neighbour's backyard, thank goodness. Anyway, by then, Dad had mended the gap in the backyard fence).

You could summon it back by just knocking its feeding bowl against the floor. Clink, clink, and in seconds, it would come dashing in, knocking its head against the window grills in its hurry to jump into the house.

One morning, just before going to school, I clinked the bowl. But no cat. I finally found it lying in the big drain outside our house. Its mouth was open, and it was drooling. I carried it back to the house, knowing that something was amiss.

There was no bleeding. But it must be injured internally. Mum insisted that I leave for school or I would be late. When I returned from school, mum told me that the cat had died and she had asked the garbage man to take away the carcass.

"But are you sure Meow Meow was dead? What happened if it wasn't really dead?" I kept asking.

Mum sounded impatient and told me not to ask anymore. I now understood that her heart was just as heavy, though then, I was very unhappy and thought she took the chance to get rid of the cat, the worst scenario being that it was dumped without given a fighting chance to live. But now, I knew for sure that mum wouldn't do a thing like that.

I didn't keep any more cat since then, till about 15 years ago. (My landlord's cat didn't count, though I was considered a part owner.) The little kitten was found by my colleague near the MRT station at Clementi. Again, it was around Christmas that I took it home. It was so small, I had to keep the toilet bowl cover down just in case it would clamber up, fall in and and drown.

It grew into a 7kg ball of fur and lived for a full 13 years. Many vets had some difficulty pulling it out of the laundry basket that I would keep it in when I took it for its jabs and checkup. Do you think he is overweight, and should I put him on a diet, I usually asked the vet in attendance. Hmmm, if it likes to eat, let it eat, replied this vet, who was a little on the stout side himself.

I love all vets. They are truly dedicated and really nice. But I am forever grateful to Dr Jean Paul Ly. Not only did he lift heavyweight Meow Meow the Second up with ease, he also kissed it on the forehead and called him Sweetie. Wow, I felt better already. Dr Ly also successfully removed the cancerous growth at his lower jaw.

After the operation, I was able to take Meow Meow home. He was in good spirit, ate and drank a bit, turned over on his back into his favourite position (tummy up) on my bed -- and purred.

But two days later, he was coughing and his nose was running badly.Back to the vet. Back home with a packet of medicine which MM  vomited all out. Food was refused. Called the vet. Dr Ly was back in Australia. The other vet told me to prepare for the worst but Dr Ly would be in the next morning and if I wanted, I could bring the cat in.

"If you and Meow Meow are not giving up, I will not either!" Dr Ly said in a very firm voice -- and swing into action. To me, that was the most consoling words I have ever heard from anyone.

I had to leave MM at the vet for a few days. I could almost drive to the vet on auto mode. When I last saw it, the nurse had made it a little hot water bottle from rubber gloves. MM was breathing normally, and seemed comfortable. So I felt better and made my way home.

But that night, my mobile rang at slightly over midnight. The good fight was over.