Saddest tales my mum told me

MY MUM was famous for telling me the saddest tales in her understated and undramatic way -- which made those tales even more poignant. And for many days after each tale, I would beg her to change the ending -- which she stoically refused, saying that was how the story ended and she couldn't change a thing. 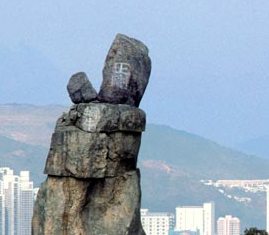 Whenever I sat at the doorstep of our old house waiting for mum to come home, one of the stories she told me would come to mind. It was about a wife who waited for her husband to come home. Couldn't remember why her husband had to go on this long trip. But it was a trip of no return. The wife waited day and night... day after day... till she became a fixture at the mountain top where she was looking out for her husband, probably with the vision of him walking homeward bound on the trail below the mountain, swinging his luggage happily. She turned into a rock waiting. The mountain was named "Looking Out for Husband" (Mong Fu San in Cantonese). You can see this mountain in Hong Kong -- it is shaped like a woman looking out into the horizons.

Another tale I would always remember was again, of a woman waiting, this time for her son to climb down from the rope that led to the skies. Some magicians from India, can make a rope go up skyward (like the beanstalk in the fairy tale). Apparently, a boy observed a magician doing this and secretly learnt the trick. The boy boasted to his mum that he could perform the trick and despite his mum's pleas not to do so, he climbed the rope. "I'll bring you all the treasures I can find from the skies above!" shouted the boy as he climbed.

"I don't want any treasures. I just want you to be with me, safe and sound! You come down at once!" the mother shouted back -- but to no avail. Up and up the son went and gradually disappeared into the clouds. His mum cried her eyes out for she had a bad feeling that she would not see him again. For many days, she waited at the foot of the taut rope which led to heaven. Suddenly there was a burst of thunder and the sky yielded an arm... then a leg...and then other parts of the body that was her son.

Tales of separation were I supposed, the saddest. I also remembered the tale of a little spotted deer which was separated from its mum in a forest fire. The fire was caused by a careless person tossing a cigarette butt onto some dry leaves in the forest. Soon the whole forest was ablaze. All the creatures ran in separate directions to escape the fire. In the commotion, baby deer was lost. Mother deer searched and searched for her darling, but in vain. Actually this tale was told in the form of a comic, in a magazine published by Life Church. Mum would read it out loud to me during still afternoons. I asked her almost every other day whether there was a Part 2 in the magazine about the mother finding its baby.

I didn't help that the next page of this magazine after the comic, had a picture of a little girl praying at a grave of her mum. Combine the two tales, and you have the saddest story of separation.

Another tale, was really my mum's dream. In this nightmare, she was looking for me and couldn't find me. She panicked, stepping on countless heads of multitudes of people in her hurry to look for me. She woke up without finding me. I hugged mum tightly and told her to dream again, this time, she needed to find me in the dream. But she didn't have the dream again.