All fluffed up, with one leg raised 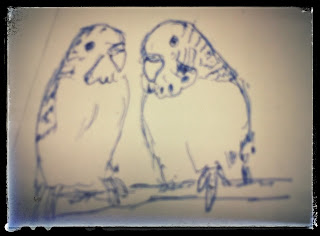 MY dad was fond of birds. Maybe that's why I was named "swallow". Our old house at Serangoon Gardens always had a few birds around -- when Dad was around.

The garden itself was heavily visited by little brown sparrows. My dad would tell me why they were called "wor cheok jay" ('little field birds' in Cantonese) as back in China, these birds would be pecking at grains in the fields.

There were a few other species which visited us -- I don't know what they were but they had yellow backside. My second brother and I actually took care of a baby (of the yellow backside species) which we found lying on the grass in the garden. We put it in a shoe box and fed it strips of bread soaked in milk. My brother said the strips would look like worms and so they would go down well with the baby bird. We left it in the garden in the day -- but the mother bird did not come back for it. We took it into the house in the evenings for fear that stray cats might make a meal out of it.  It grew up quite strong and flew away happily one day.

My dad liked to shop for birds. We started with two budgies -- two green -- then one green and one blue -- then two yellow. He would bring me along when he went to this street that has a row of bird shops down one side of its length. It was a very noisy street -- as you can imagine. I have the impression that it was either Rochor Road or Sungei Road. My dad nicknamed the road "cheok jai gai" ("bird street" in Cantonese). I remember a river which flowed behind the row of shops. They sold all your needs for birds -- cages, containers for water and bird seeds, and cakes (these were small round cakes made of green beans which you stick on the side of the cage for the birds to peck at.)

The bird shop owners would suggest all kinds of birds for dad. We did try out one or two other colourful species besides the budgies. Their diet was fruit, the bird keeper told us, not seeds. But these fruit eaters had such big splatters of watery droppings that we eventually went back to budgies.

Budgies' droppings are manageable. Little greenish black and white things. And they are such darlings especially when they preen each other's head.  A few owners have told me how affectionate their budgies were. But those we had in our childhood were not particularly so.

I used to poke them gently with my pencil when they were all fluffed out in their sleep with one leg up. This would cause them to go all a-fluttered. Making grumpy noises, they would compose themselves and would gradually lift one leg up to sleep again.

One afternoon, perhaps they were all fluffed up as usual, someone came in through the gate and snatched them -- cage and all. My eldest brother gave chase on his bike. Pale and breathless, he returned triumphant with the bird cage.

The pair of love birds none the worse for their adventure but were excited for quite a while, their feathers tight around their bodies. It wasn't some time before they settled down and were all fluffed up again, with one leg raised.